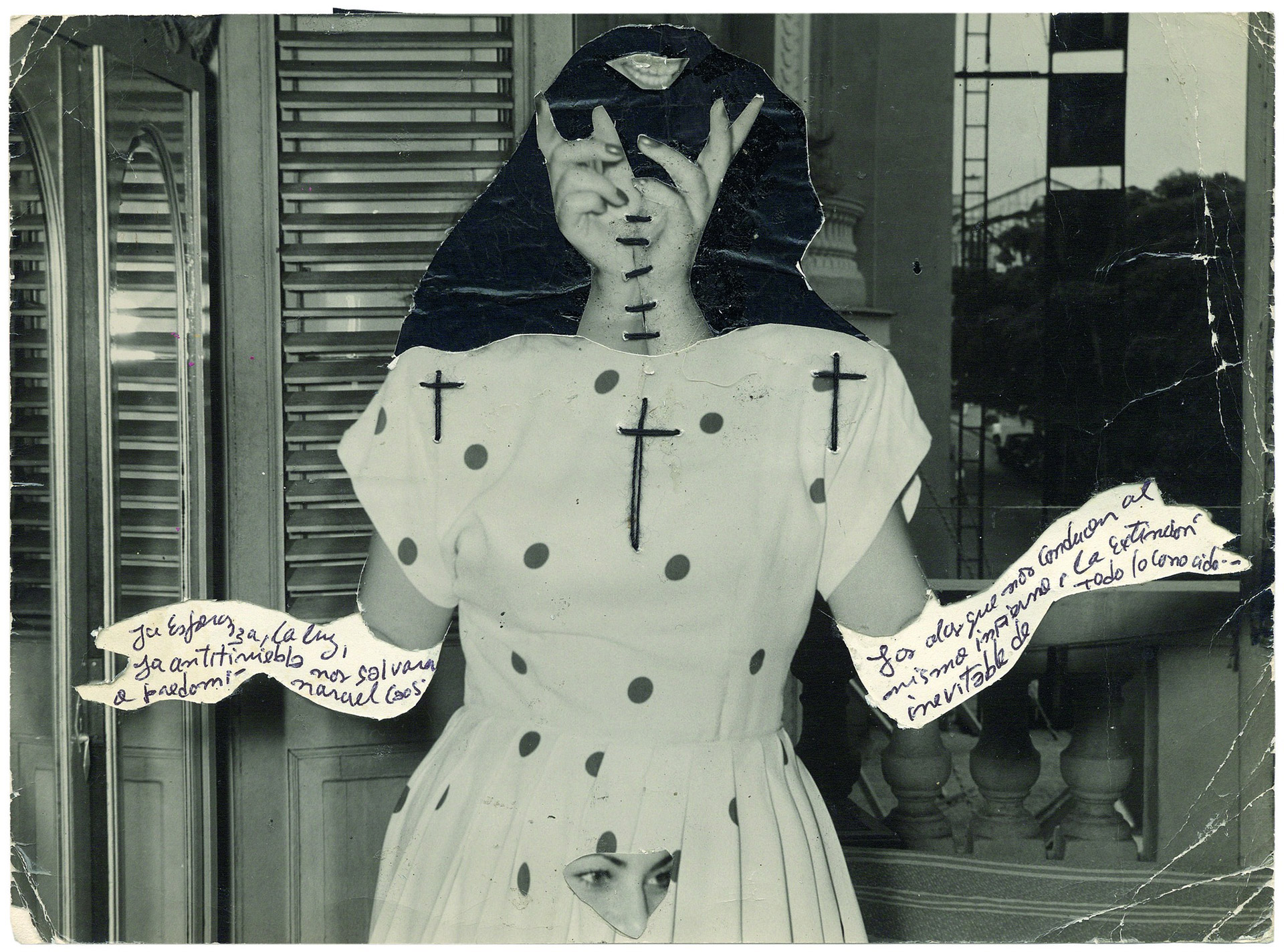 The exhibition is a compilation of several love stories told through archival photographic and film materials and collages. The male eye is the lens through which the recorded subject is a woman. In these stories, the filmed and photographed object escapes the artist who looks at it, becomes autonomous, mysterious and inaccessible. The love story of two people turns into a separate chronicles of lonely atoms.
____

Last Tuesday, I went up to the attic and found a box with some of Uncle Paul's things. I was struck by an untitled red book. It is by a certain Paravadin Kanvar Kharjappali and it was published in Mexico in 1919. On the first page it says: “God also doubts about your existence.” I have started reading I and it fascinates me. It says, for example: “The closest bond that exists amongst human beings arises from hatred towards a common enemy. That is why us misanthropists love each other.” “In war the most radical fighter on one side seems to ignore that had he been born and raised on the other side he would be just as radical, but defending the opposite.” “I’m equally surprised by the fact we don’t spend all day killing each other as by the fact we don't spend all day making love.” (…)

We saw a beautiful black pig by the sea today. Well, I saw it. Léon filmed it. He's still obsessed. Tonight, there's a party all over the island. Léon is going to shoo the fireworks from the sea. Yesterday for the first time. I kissed a man that wasn’t Léon. I was dragged towards him without thought or any will power. He's Mexican, but he lives in Majorca. His name is Leonardo. Well, they call him Leo. I'm safe if I say his name in my dreams. I feel guilty for not feeling guilty. I can't help feeling happy. I should feel remorse. I really should. But I prefer to follow Kharjappali's advice: Desire is not something to be wasted. (…)

I never understood the urge to climb to the top of a mountain, but I always understood the urge to move away from everyone. The temptation to disappear without leaving a trace. One day my uncle Paul told his wife he was going out for a short walk and that he would be back for dinner. He came back 40 years later. When his wife opened the door and saw him, all she said was: "Your dinner got cold." About the decisions we make, Kharjappali says: “Avoiding wrongdoing for fear of God doesn’t show kindness but cowardice.” Regarding suffering, he says: “The eternity of an instant of pain lasts much longer than the eternity of an instant of pleasure. K. about death: When faced with death we curious people have an added advantage.” And: “If human nature implied living forever, we would devote all our efforts to discovering how to die.” (…)

Places in the middle of nowhere. Places without a heart. Places you forget while you’re still there. Places that don't breathe. Places that don’t move. Places that neither smell, nor bleed, nor bite, nor speak. Places that can go right through you without touching you. On Molokai Island an old man died without ever having seen the sea. The island is about 600 km2. Living on such a small island and not having seen the sea, fascinates me. I think we all live on Molokai surrounded by sea we've never seen. Today I remembered what Kharjappali calls "sweet death" – “when everything is moving around you, and you drift off.” Personally, at times, I experience the opposite: I’m the only one moving, and everything else around me disappears. (…)

In every island there's something ferocious I like. I had a weird dream tonight. In my dream I know I’ll die the day the Pope dies. I find out about his death in Venice. At first, I don't care. But suddenly I’m aware, I feel terrified and embark on a journey to flee from death. Suddenly, I notice death approaches. And eventually, it finds me. Leo's grandmother once told him: “We can't see death because death is always walking." The phone rang about an hour ago. It was doctor Baumann. He’s told me the cancer has reached a very advanced stage and that nothing can be done. He took for ages to tell me that I have two or three months left to live. I’m reminded of Kharjappali's epitaph: “Thank you for everything, Lord. But I didn’t understand a thing.” (…)
___

Fragments of Vivian Barrett´s diary over the 40s through to the 60s of the 20th century used in the film by Nuria Giménez „My Mexican Bretzel”.

In 1983, Guru Kharjappali’s texts were found to have been plagiarized extracts from the works of other authors.
___