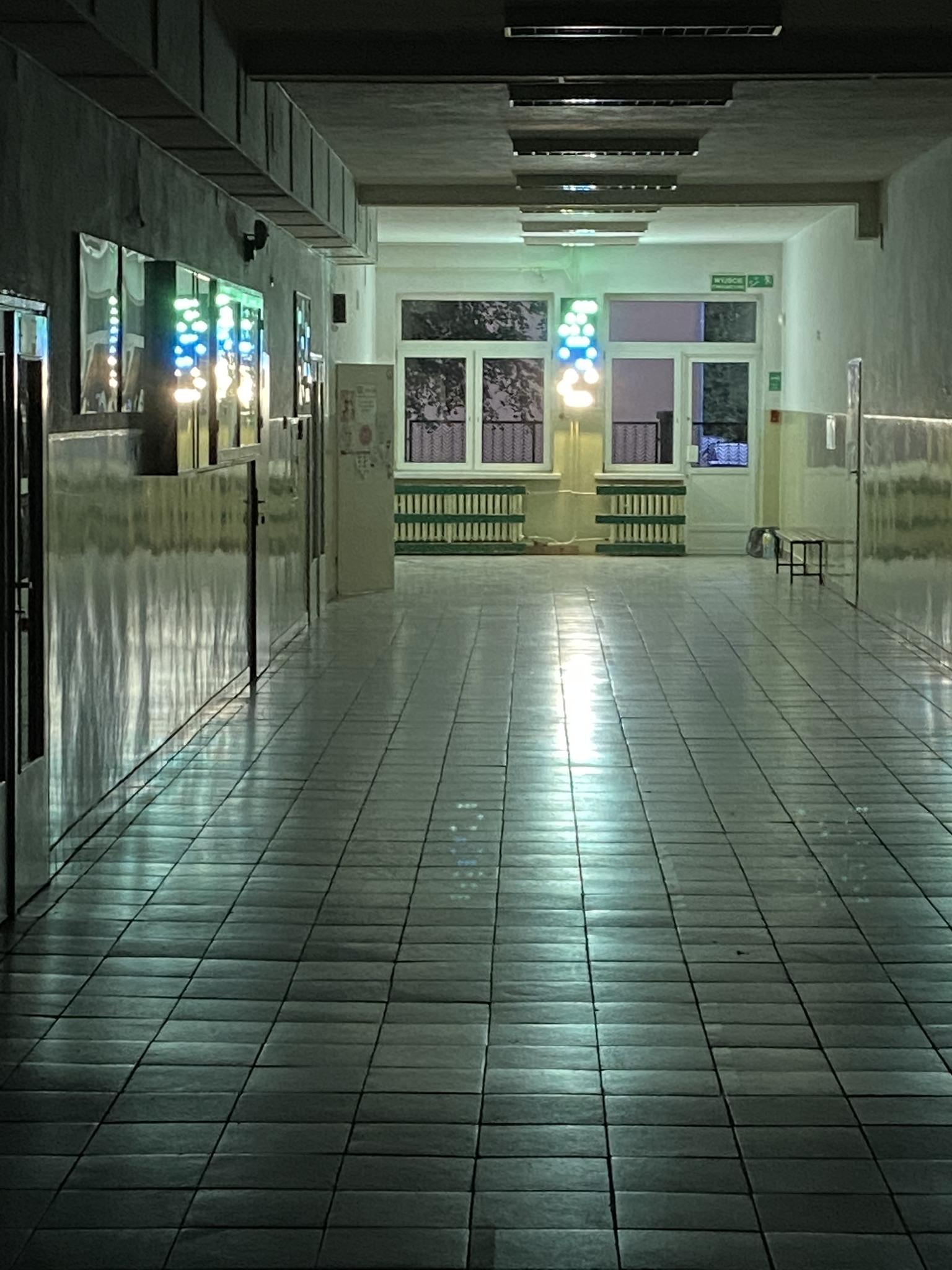 The Dzielna Foundation invites you to the opening of the NIGHT SCHOOL exhibition and to the accompanying events. The exhibition continues topics undertaken by artists in their works created at the Tadeusz Kościuszko High School in Konin, within the framework of the Project “Return to School. Works by Contemporary Artists in Polish Schools“ [Razem Pamoja Foundation in cooperation with the Society for the Encouragement of Fine Arts].

The NIGHT SCHOOL exhibition is a journey in time in order to heal one‘s relationship with oneself and with the world. It’s a story resembling a fairy tale - its core always remains the same, the only thing that changes are the historical costumes being worn. It’s a longplay with songs about injustice, truth, and beauty — and each of them has a potential to become a single.

This show is an opportunity for adults who are pretending that they never abused their relationship with themselves. It’s a collection of healing messages and tools, where healing happens by making space to imagine the world and ourselves in it in a different way, to design ourselves in another coexistence. It’s like descending to hell and ascending to heaven — to make sure that being in a relationship is based on mutuality. To defuse the unbearable, oppressive sounds and fluorescent light, to prevent them from activating the entire disharmony of fear in the body, to turn them into but a memory.

The NIGHT SCHOOL has the taste of memories. The multiaspectual character of rituals from the time of personality formation - the times of origin of the artists’ creative process in the ”Return to School” project (Konin, 2021) — decolonizes the ways of remembering about remembering from the perspective of individuals and communities. In the times of decolonization and degrowth we would like each relationship to be like making braids, when only warmth and kindness flow between two people.

The NIGHT SCHOOL is about doing overdue homework that consists of healing open wounds, or of finding courage to face one’s own desires: inappropriate according to norms, although they do not hurt anything or anyone. The show gathers decolonizations of bodies and desires, decolonizations of fields of view narrowed by many centuries of Judeo-Christian tradition of binaries. It's an exhibition presenting a set of mental maps that lead us through the sources of identity and orientation in the world that we already know (and also that we use subconsciously) to a new order. The only rules of that new order are: to be aware of one’s responsibility for oneself, and to be responsible for each other. A question remains: how to be generous while using our gifts, dreams and experiences for the common good, but still belong to her own self.

It’s a show about healing stories: about sweat, shame, low emotions; passing through which leaves us only with the soothing hum of a living meadow and the sun. Just before sunset.

ILLUMINATIONCORNER'SILLUMINATION — in the corner, to the corner, to cornerland. An infinitely universal metaphor, corner mythology and muffled, quiet voices of girls, teenage girls and women in a tragic position, stigmatized, erased, forgotten. For centuries, incessantly, put in a corner by everyone. The imperative of existence makes them unstoppable, rebellious, full of pain, fury, anger; conscious, strong, and free — they resist, they don't surrender, they keep fighting. On behalf of all of them and myself, I illuminate, I transfigure, I establish the corner's meta level.

A seemingly soundless structure with electricity playing the leading role — both in terms of materials and symbols, as a communication tool, but also a magical artifact that has a real power to transform reality by expressing feminine energy. Thanks to suggestive use of movement, the process of tension between phrases of silence registers the moment of submersion in electric charge. Transgressive, unbearable, it becomes restricted and muffled at the same time. The contemplative and soothing mood is illusory, unleashed messages amplify the feeling of anxiety.

ELECTRIC LIGHT SOUND — ergonomic-interactive composition for an organized movement of electric charges of objects in space. A spatial musical score divided into a series of sequences showing light matter dispersion, starts to create constellations, a composition of the sound of light — the light of sound. Focusing on a single detail, the flexible auditory and choreographic material revises the traditional form of concert. It consists in intervening into the space of auditory and visual events via performative gestures, establishing a physical relation with the elements levitating in it. Contact and touch become an essence that leads and specifies the musical narrative, transporting the visitor into the area of sound illumination abyss.

— ABOUT FILMING WITHOUT AN OPERATOR O FILMOWANIU BEZ FILMUJĄCEGO — Conversation of Adriana Prodeus with Karol Pałka in the context of video works at the Tadeusz Kościuszko High School in Konin*
— Wednesday 12.10, 6pm

The film director Karol Pałka will talk to Adriana Prodeus about the making of the movie in the Konin high school. They will jointly reflect on whether an objective camera is at all possible? How does its presence affect the protagonists and their closest environment? They will also consider matters related to the camera work itself. Are film images an aesthetical or an ethical decision?

— ABOUT AIR AND BRONZE — The history of one hero and one monument. A duo talk about the portrait of Tadeusz Kościuszko — Conversation of Ewa Toniak with Przemysław Branas about monuments-not-monuments, unobvious heroes, and contemporary art *
— Friday 14.10, 6pm

It is not easy to be a patron, although few achieve this honour while still alive. It is also not easy to face a bronze-cast hero every single day, as Tadeusz Kościuszko’s bust greets everyone entering the school. It is hard to knock it over from its pedestal in a fit of rebellion. It would be inappropriate to cover it.

— PREMIERE OF THE FIRST EDITION OF THE EMPIRIA QUARTERLY — Editor Piotr Wesołowski talks to Agata Pyzik and Jan Eustachy Wolski — authors of the quarterly
— Thursday 20.10, 6pm

The EMPIRIA Quarterly — in search for new empiricism, between images and notions, at the crossroads between art and theory. Its first edition, the NIGHT SCHOOL, has been devoted to education-related afterimages, high school desires, personal fears and hopes. The discussion panel will include:
— Agata Pyzik, observer of the cultural phenomenon of high-school series
— Jan Eustachy Wolski, author of illustrations about the growing up of a homosexual pupil in an elite boy school in the nascent 20th century and the fading 19th century
— Piotr Wesołowski, responsible for edition

During the meeting, they will talk about the high school utopia and dystonia, the romantic-decadent youthful hiccup, and about the way the machines of desire can resist, or not, being captured by the normative machines of the social apparatus.

A teenage girl's room. Posters on the walls, drawings scattered around. A mirror, in front of which I danced. I turn on the music. I want to come back to the space of my schooltime room. Listen to myself, to what I feel now, to what I was feeling ten years ago. I want to start exploring again, as I used to do at the beginning. Without knowledge, experience, without prejudice and fear. I invite people to share this space with me and to experience it together, talk and listen to music. We will see what happens, how we feel, what we talk about and how we stay quiet.

On the 25th of October I will invite 14-20 people to my space, to hold 6 meetings, with 2-3 people each. We will spend about half an hour together, talking, being quiet, listening to music, to silence, reading BRAVO. The meetings will take place at hours similar to the time after kids get home from school. On a weekday, when we would close the doors to our rooms, pretending that we were studying for another test.

* The events will be held in the Polish language